Pi Omega Zeta Chapter
Zeta Phi Beta Sorority was founded January 16, 1920 on the campus of Howard University in Washington, D.C. by five coeds: Arizona Cleaver Stemons, Myrtle Tyler Faithful, Viola Tyler Goings, Fannie Pettie Watts and Pearl Anna Neal. These women dared to depart from the traditional coalitions for African-American women and sought to establish a new organization predicated on the precepts of Scholarship, Service, Sisterhood, and Finer Womanhood. The trail blazed by the founders has been traveled by thousands of women dedicated to the emulation of the objectives and ideals of the Sorority.

The sorority is the first organization to charter a chapter in Africa (1948); to form adult and youth auxiliary groups, the Amicae, Archonettes, Amicettes, and Pearlettes; and to be constitutionally bound to a brother group, Phi Beta Sigma Fraternity, Incorporated.

Zeta's national and local programs include endowment of its National Education Foundation; community outreach services; and support of multiple affiliate organizations. Zeta chapters and auxiliary groups have given untotaled hours of voluntary service to educate the public, assist youth, provide scholarships, support organized charities, and promote legislation for social and civic change. A nonprofit organization, Zeta Phi Beta is incorporated in Washington, D.C. and in the state of Illinois. The Sorority is supported by the dues and gifts of its members. 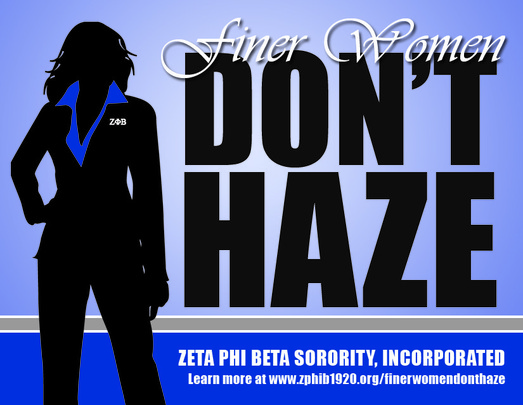 Zeta Phi Beta Sorority, Inc., has a membership intake policy, which forbids all forms of hazing. Each prospective member is advised in writing that membership in Zeta does not require subjecting oneself to hazing. Prospective members are directed to refuse to participate in any hazing activity, and are directed to report all hazing and hazing attempts to the proper authorities. Members receive instructions in the intake process. The International President has the authority to discipline any member who does not follow the written intake procedure or violates the sorority’s policy against hazing. This authority includes the power to suspend and the power to set conditions for reinstatement.

Each prospective member is informed that hazing is against the sorority’s rules. Prospective members are directed to walk away from any hazing activity, and to report all attempts to haze to the proper authorities.

Zeta Phi Beta Sorority, Inc., cooperates with all civil and university authorities in the investigation of all alleged hazing incidents. Members and prospective members will be held responsible to the sorority for violations of policies against hazing and the sorority will pursue to the full extent allowed by law to obtain indemnification for damages caused by the activities of the members or prospective members who participate in illegal, unauthorized or prohibited conduct despite notice to refrain from such conduct.
Pi Omega Zeta Chapter